GLOBAL FLASHPOINTS: How the Global Collapse May Begin (Video) 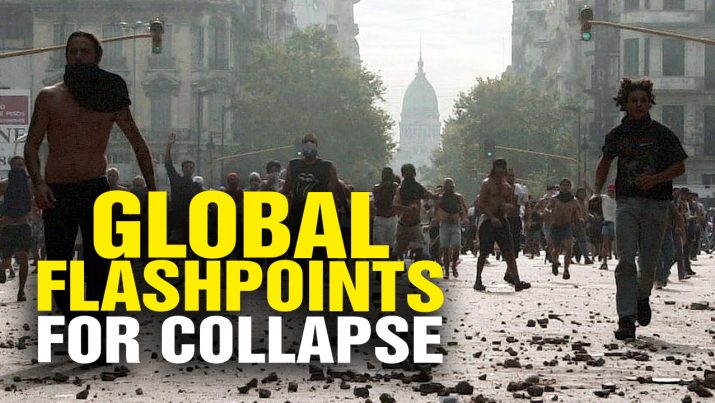 The Health Ranger gives you an overview of some of the most explosive global flashpoints that could lead to sudden collapse, war, revolutions or revolt.

“Well, the world is rapidly approaching a breaking point financially as well as in terms of government stability or social stability. Let me cover just some of the flashpoints that are happening right now. Any of which could trigger the global financial collapse that we know is imminent and we know is coming – it can’t be stopped … but we don’t know the timing. So, here are some of the flashpoints: Right now, obviously we have Venezuela breaking down in to civil war virtually … citizen’s armed revolt against their incompetent socialist government lead by Maduro – who is know almost literally engaged in warfare against his own citizens in order to stay in power. Citizens are starving to death. The government there is doing things like taking armored cars and ramming them into crowds of protesters. Literally just running over people, murdering them government vehicles – which is of course an ISIS terrorist tactic, now being used by the government. There is socialism on display for you, isn’t it. That’s just one area…” Listen to the full podcast below:

Stay informed at Collapse.news and Survival.news

GLOBAL FLASHPOINTS: How the global collapse may begin from NaturalNews on Vimeo.