Leftists NOT QUALIFIED to Participate in a Free Society! (Video) 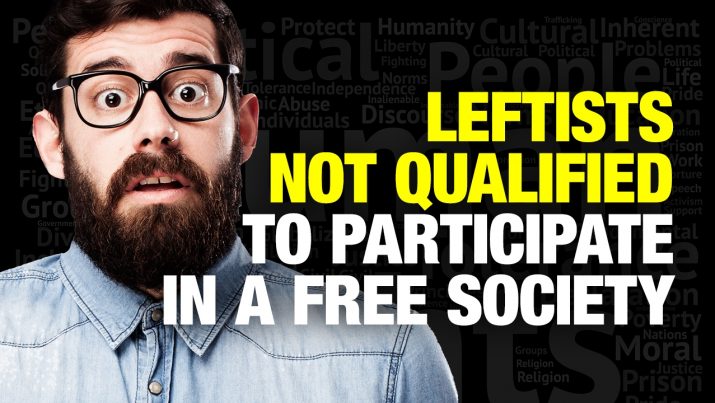 The Health Ranger explains why Leftists have proven again and again that they are NOT QUALIFIED to participate in a free society (or democracy).

They are totalitarians who have utterly abandoned logic, reason, evidence, truth or fairness. They’ve devolved into fascist, left-wing totalitarian haters, racists and bigots.

Podcast Transcript: “After analyzing the Left’s reaction to the Charlottesville murder and the riots – and all that went down there – I’ve come to one really sobering, and a little bit sad and highly disturbing conclusion, which is that the mainstream left in America today is wholly unqualified to participate in a free society. They cannot participate in a democracy. Why? Well, simply because they cannot process information with anything resembling reason or rationality. The Left has lost its collective mind after this car ramming attack – which killed one person. Even as, over the same weekend, nine people were shot to death in Chicago – the gun control capital of America. I guess those nine lives don’t matter to anybody on the Left. It’s the one life at the Charlottesville rally that gets all the attention … and yes it’s wrong when anybody is murdered as an innocent person on the streets of America. We all agree with that. All of us want peaceful dialogue so that we can talk to each other, instead of murdering each other. Yet what is the left done in response to this? They have called for more violence, more murder, more hatred…” Listen to the full podcast below:

Leftists NOT QUALIFIED to participate in a free society! from NaturalNews on Vimeo.